We are truly sorry, but although we tried really hard, the weather beat us again today. The second we reached our counting location for the seabird migration, it started pouring again (thunder and lightning included) and after 20 minutes and only 3 Common Scoters (and some gulls that were not distinguishable due to the bad visibility), we accepted our defeat and went back to the station. Here is a picture to show our mood and defeat, the moment we gave up (5 seconds out and the phone was completely wet, hence the bad quality). Unfortunately, this is the last picture of this umbrella being alive, may it rest in peace, we surely will never forget it's support: On the plus side, Lars, Denna and Jørgn arrived at the station, so we once again found out how easy-going Danish birdwatchers really are (big compliment).
We hope you are as eager for more information on the actual migration as we are,

Due to the very wet morning today, we neither counted, nor ringed birds. The whole day was very unstable, it basically showed every facette from nice and sunny to doomsday. Even the weather forecast had problems getting it right, we checked several times and were surprised by the complete opposite not only once. In the evening, we received a nice visit by Torbjørn and Peter and had some interesting talks about nature and conservation. Furthermore, the bad weather offered us an opportunity to look through some of the pictures from yesterday. We would like to show you two pictures of species, which we hope you can, despite their frequency, still enjoy as much as we did.

This one shows a juvenile, dark-morph Arctic Skua, Stercorarius parasiticus, just before unsuccessfully chasing a Sandwich Tern. We have very low numbers of Arctic Skuas in Austria (skuas in general actually), so this bird was nice ID-practise for us. This picture shows a juvenile Sanderling, Calidris alba, a scarse bird to us aswell, as a lot fewer birds travel across mainland in Europa than those migrating along the coast.

Let's hope, we can report from ringing and migration counting tomorrow, fingers crossed,

A day of perfect timing..

Migration counts started slowly, but with a nice amount of terns and gulls perched on the beach. As water levels rose and military exercises didn't take place today, the perched gulls and terns were flashed and then left the beach, luckily we have counted them early enough (great timing!). Waders aswell as Common Scoters were low in number today, but a floating flock of about 850 Great Cormorants was nice to watch (and challenging to count). Oystercatchers reached up to nearly 1.000 birds with, on average, bigger flock sizes than the previous days of the week.

Ringing was extremely quiet today, and apparently there is not much to say besides than: better times are sure to come at some point :).

After some anger on an unidentified juvenile harrier (which passed by just a bit to late to be identified properly), we finished our counting duties and immediately started off to Tipperne as fast as we could, as all of us were keen to seeing the interesting falcon spotted yesterday. Luckily enough, we arrived and had good flight views just before the bird disappeared again so... perfect timing. We then chose to change location and accidently stumbled across a Buff-Breasted Sandpiper (which we respotted after it has not been seen for a few days). These two birds surely are very hard to find in field within a few minutes so.. again, brilliant timing (and helped with seing over the harrier.. at least a bit).
A walk to the beach in the afternoon brought several species of waders into photo-distance (so stay tuned, we will post some nice ones in the following days) and revealed an Arctic Skua chasing Sandwich Terns closely to the beach (which was relatively packed with tourists today). Just after getting in, the rain started.

Finally, here is a nice picture, Sandra took to show that you don't necessarily have to see a bird to prove that one has been here: Few visitors, but many visitors.

A warm and windy morning started with smaller numbers of waders at the coast and totally added up to about 600 individuals, mainly Oystercatchers, Dunlins and Sanderlings. A nicely unexpected visitor was a young Goshawk in the first hour of the count. Scoters were, again, low in numbers but accompanying Teals and a single Velvet Scoter made some of the Scoter flocks a bit more interesting. After counting the terns, which still seem to avoid roosting on the beach that much, Henrik, David and Henning carried on counting for another hour and were rewarded with the seasons first Osprey.

Despite the wind, all nets were opened to add up to the total of 242 m of nets. All individuals were captured within the first three hours of ringing and literally left us empty handed for the remaining two hours. Although individuals were similarly low as yesterday, species richness was nicely balanced.

A young House Martin kept us active for a few hours as Bent and Sandra found the young fellow who, apparently, has fallen out of it's nest. Several efforts to draw the parent's attention to the young chick failed, which is why we finally came up with a plan to put it back into the nest (see picture :) ).

Svend, Svend and John visited the station and once again, the Danish and the Austrians realised how much we value each other, as we realised that the Danish name for Wienerbrød includes an Austrian City, while the German name includes a Danish City. Sharing stories and laughs created a cosy and homely time, a welcome diversion to the otherwise rainy afternoon. First of all, a short hello from Sandra and Christian, we know you have been forewarned in the last blog, but we hope our future posts are as exciting as the previous ones. HEJ :) Christian and Henrik enjoyed a nice day with low numbers of migrating shorebirds, but a small increase of Oystercatchers throughout the morning. Gannets were, again, hunting closely to the shore (very much to Christian's excitement, as Gannets are a very unusual sight for an Austrian - no coasts there). Today's highlights were two Caspian Gulls in a roosting flock of the usual gull- and tern suspects. Ole carried on with counting for another hour and found a third Arctic Skua to the two of the morning counts.

Sandra joined Bent at ringing birds. Their morning was equally quiet with a few passerines, although Sandra especially enjoyed an Icterine Warbler and her first Bullfinch in the hand. Jonas and Morten continued ringing with some German guests (both Sandra and Christian joined) and nearly doubled the number of birds from the morning. A Crested Tit in the net was another highlight for the Austrians. 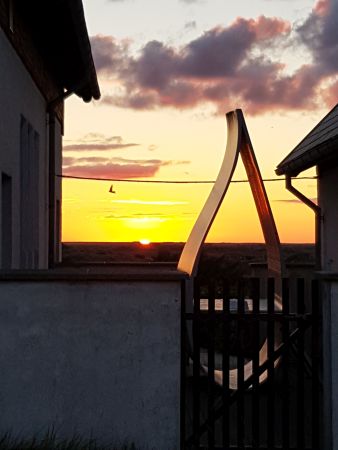